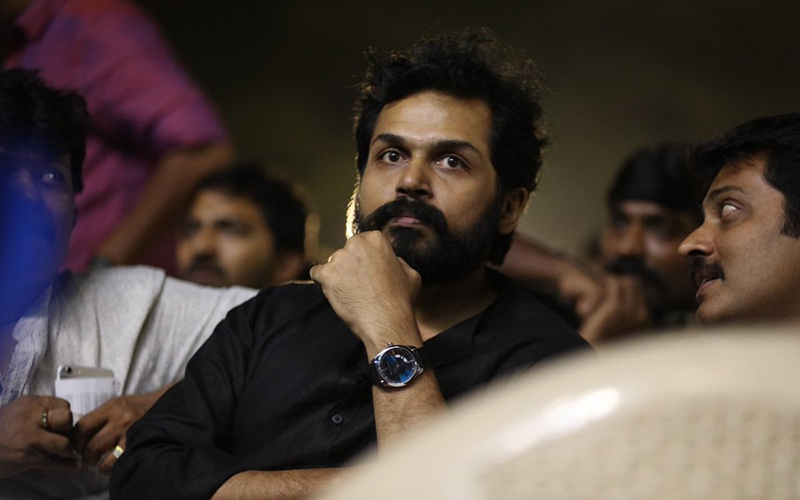 The unit of actor Karthi’s upcoming film, tentatively titled Karthi19, had to wind up shooting and make their way down from the Dindigul Rock fort better known as the Dindigal Malai Kottai after members from various Hindu organisations took exception to a film on Tipu Sultan and Hyder Ali being made there.

Members from various Hindu organisations such as the Hindu Makkal Katchi and the Hindu Munnani staged a protest in Dindigul after they got to know that the film that was being made was on the life history of Hyder Ali and that it was to eventually be titled Tipu Sultan.

It may be recalled that the 17th century fort was built by King Muthu Krishnappa Nayak in 1605. However, it was captured by the Mysore Wodeyars and was of strategic importance to both Hyder Ali and Tipu Sultan. The fort has a temple within its premises. It is believed that Hyder Ali, during his reign, moved the presiding deities of the temple — Lord Padmagiri Eshwarar and Goddess Abirami — out of the temple into Dindigul town. For long, Hindu groups have been requesting the concerned government departments to grant them permission to move back the presiding deities into the temple and to perform poojas in the temple like before. However, permission hasn’t been granted to them until now.

When news leaked that a film on Hyder Ali and Tipu Sultan’s life was being shot on the Malaikottai, members from the Hindu organisations got offended that while their requests to offer prayers in a temple there had been turned down, a film unit was being allowed to shoot a film on Tipu Sultan in the fort that has historical significance.

As a result, they gathered and protested. The police, who arrived on the spot, swiftly swung into action and ensured that the film unit vacated the premises.

Speaking to the media, Hindu Munnani Dindigul district secretary Sanjeeviraj said, “The time allotted for even the public to visit the fort is between 9 am and 4 pm. Beyond that, even the public is not allowed to visit the fort. When that is the case, how is it that this film unit was allowed to stay overnight at the fort? The police will have to inquire in to who gave them permission for all of this and take appropriate action against them.”

Sanjeeviraj claimed that the actions of the film unit that was looking to make a film on Tipu Sultan’s life had deeply hurt the sentiments of the Hindus. Stating that Hindu organisations strongly condemned this action, Sanjeeviraj said that this time they had let the crew go safely with just a warning. However, he warned that if the film unit was repeatedly given permission to shoot the film in the fort, they would not hold back. ‘We will thrash the unit the next time,’ he said.