Forget the story (not that there is much of it!), even the title of this film is simply out of this world. The makers couldn’t have come up with a more appropriate name for their film. The characters in this film drink so much and so often that one is left wondering if whether this is a campaign for TASMAC. By the time the film ends, you find your head spinning! The logic of the film goes haywire occasionally making you wonder if this was really something that the makers came up with when they were in their senses. One has no other option but to congratulate the team for coming up with such a title that actually communicates the essence of the film so wholesomely and so handsomely!

Next, comes the story or whatever it is that they show you on screen for the next two hours or so. It is simple. An ‘empowered’ woman who lives life on her ‘own terms’ helps four of her fellow women ‘imprisoned’ by their ‘family and societal bonds’ to break ‘free’ and become ‘empowered’ like her. She inspires them through her lifestyle and shows them the way to break this ‘patriarchal’ set up which ‘suffocates’ and ‘strangles’ the ‘freedom’ of women.

Step one of empowerment or what the makers show us as ‘Round 1’ is trying out alcohol produced by Indian brands. Mind you, Oviya as Rita never instigates them to try alcohol. See, this is what we call ‘responsible’ filmmaking. It is just that her actions and her ‘carefree’ lifestyle earn her the admiration of her friends, who are then ‘inspired’ so much by her that they want to try alcohol. They gather for a little get together where they indulge in girl-talk and as Rita brings her drinks along, are tempted to try it. They try it out while discussing their ‘problems’ and  find it ‘liberating’. The ‘fun’ session they have is so exhilarating that they look forward to the next such session and want to ‘progress’.

So, they decide to up the ‘fun’ quotient and become empowered even more. So, what is the next step of empowerment? Well, they progress to foreign liquor the next time they get together! So, Round 2 is dedicated to trying foreign liquor.

But the problem is when the women drink, it makes them emotional and leaves them weeping. And that, in a way, kills the fun for them. So, how does the team overcome this problem of turning emotional? Simple, progress even more. Stop trying liquor. Start trying ganja. Yes, Round Three is where these progressive empowered women start trying out ganja and boy, do they laugh!

If the women try out all these, don’t blame them. Stop blaming the victim, remember? It isn’t their fault. I don’t even have to say whose fault it is. You’ve lived long enough in this society to know by now on whose shoulders the blame will fall. Yes,you guessed it right! It is the men in their lives who have caused so much pain that these ‘poor’ women find themselves trying out all these substances.

However, it is here that Oviya’s character shows that she is different! The smart woman that she is, she says, ‘Why is it that women need to have a problem to drink?’ She makes it clear that she drinks because it makes her happy.

But you know what, the film ends with the women returning to having fruit juices instead of alcohol. Agreed, it might be just half a scene but then, what did we say about making socially responsible films? Way to go, Anita!

When a male director makes a film, we make it a point to look at how the women in his film are portrayed. So, applying the same yardstick, let us look at the way the men in this film have been portrayed by a woman director.

For long, Indian men have sincerely wondered what it is they must do to make women understand that they are genuinely interested in their welfare and prove to them that they are there for them. For years, women have been telling men to be progressive, and come out of their ‘regressive’ mindsets and set them free. Well, the director of this film does men a favour in this film by creating this character that shows what a ‘good progressive man’ looks like and what he must do to be rewarded with the title.

The character we are talking about is the partner of Oviya’s character in the film. He is the ‘Progressive’ male who the women reward by calling ‘good’. So, what does he do? He is the guy who is ‘understanding’ by nature. By that, what they mean to say is that he obliges the women by organizing drinks every time the women want to booze, which incidentally is quite often. He cleans up when the girls drink. He offers to baby sit, when the girls party. He carries them with care and tucks them into bed carefully when they drink so much that they get themselves knocked unconscious! What’s more, he cooks and cleans when they are busy drinking. 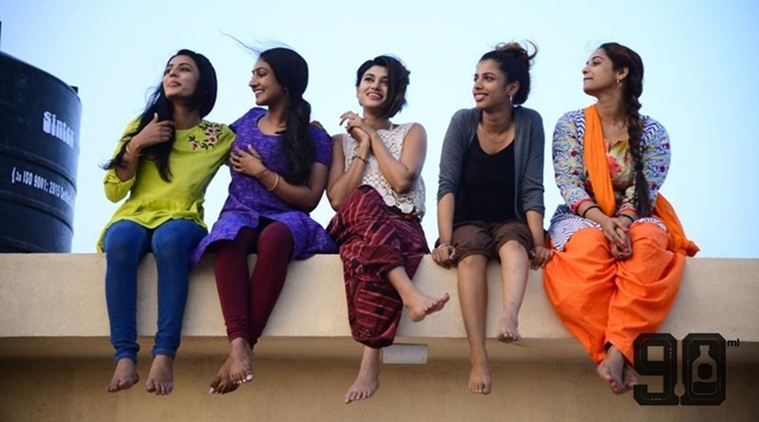 But then, he is a male and no man must assert himself before women, if he wishes to be called progressive. He must put his desires aside and pay attention to the desires of the woman he is in a relationship with! This one oversteps his limits by asking Rita, with whom he has been having a physical relationship, to marry him.

Ouch! How dare he? It’s her right that determines the outcome of a relationship. Didn’t he know that? She isn’t interested in marrying — only having a physical relationship. What’s more, he tries to assert himself by threatening to end the relationship. Horrendous mistake! If he thought that was going to work and make a woman weak, he was wrong. Remember, she is the ‘empowered’ woman? She is determined to show him who’s boss! She hits back, in ice cold fashion, saying it is his choice and politely asks him to leave but not before closing the door on his way out!

Point to be noted, the mangina loses the ‘progressive and the good’ man tag rewards that were awarded to him for overstepping his limits by trying to assert himself and for choosing to break up!

This one has a physique for which his wife fell in love with him. His aggressive nature and his ability to bash people up is what caught her eye in the first place. He is caring and genuinely in love. But then who cares, his wife doesn’t feel the love! So, she goes out drinking and smoking ganja along with her set of empowered women friends to ease the pain of ‘not being loved enough’.

She feels his love for her has diminished over time and that he does not spend enough time to ‘express’ his love for her as he is busy with his bad boss. Therefore, she insists he part ways with the boss. But then, the gangster feels he is indebted to the boss and hence finds parting ways difficult.

It is during this time, that the process of ‘liberation’ begins to happen. The rowdy-sheeter finds his wife in an inebriated state, time and again. He chooses to ignore because of his love for her and warns her not to mingle with this set of ‘friends’, who have introduced her to alcohol and ganja. But what the heck!

How can a guy decide who his wife should or should not meet? Who is he to stop her from meeting ‘progressive’ women who are looking to liberate her from her feeling of loneliness by getting her introduced to drinks and drugs? However, this woman is not as bold as Rita as she is not yet completely empowered and only in the process of becoming empowered. Therefore, she chooses to meet her friends in secret!

The poor fool chooses to take his wife to a psychologist, in the hope that she will make his wife see sense. But then, little does he know that the psychologist too is again another empowered woman, who is more than happy to take the wife’s side!

Well, this man belongs to the regular type. He is apparently understanding, caring and comforting. He doesn’t open his mouth, no matter what his wife does. The only problem is that he isn’t having a physical relationship with her. This has apparently frustrated his young wife. But why is he abstaining from physical intimacy? Well, apparently he was in love with another girl and his parents forced him into this marriage. So, now, unable to forget her, he is taking time to come to terms with the sudden tumultuous change in his life. And until then, he doesn’t want to go near his wife. This ‘’grave injustice’’ deserves the treatment it deserves by the empowered young wife who questions him as to why she is being denied physical pleasure. When he tells her the reason, she kicks him out and tells him to go do what he wants  with the love of his life. Atta girl! Selfish male!

Characters 4 and 5:
So, who are these two characters? They are two lascivious young men who ogle and drool at every female character they come across, hoping to get one or the other girl in bed. In particular, one character is after the young wife who kicks out her husband after she learns of his earlier love story and the other ogles at every character in general and at Rita in particular. They are treated like nothing less than dogs. They wait outside the place the women are partying, with no self respect whatsoever, hoping that they will be allowed in at some point. These might be two different characters but then, their mindset is one. And it is this mindset that is being stereotyped onto the entire male gender by the director!

The film is amazing in the sense that it evokes a feeling or emotion in the viewer that was completely unintended by the team. For instance, when the girls crack what they call a ‘joke’, you don’t feel like laughing. On the contrary, you feel like crying. Or even worse, you are left fuming. However, when they deliver ‘serious’ and ‘sentimental’ dialogues, you end up laughing.

Nevertheless, Anita Udeep has brought on screen, the present-day modern empowered women of society! The film, as the name suggests, is bound to give you a hang over and a bad one at that!