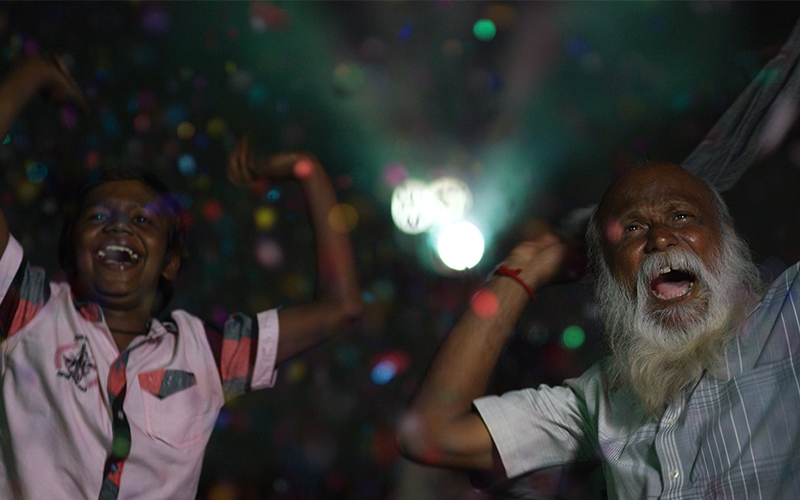 Once in a while there comes a film that is so unassuming and down-to-earth that there is hardly any hype when it arrives. But then, in just a couple of hours, it manages to win not just your heart, but also your soul.

KD @ Karuppu Durai is one such film.

How does one describe this film? What are its strengths? How does it manage to have such a profound impact on you despite the absence of even a single established star in its cast?

Well, the fact is that this film finds its strength in truth. Yes, the sequence of events that one sees in the film is something that could have happened in your life or my life. There is hardly any exaggeration.

The story is set in a rustic backdrop and begins with Karuppu Durai’s soul narrating his plight.

His body lies motionless on a bed and his family members are discussing the burden of caring for the elderly — the women of the family are complaining that they cannot keep taking care of a bed-ridden person. One of his sons is more interested in Karuppu’s property than in reviving him. Then, there is another son, whose daughter is to get married in another nine days. Astrologers have advised him that if Karuppu has to die, it has to be before this period or it could prove inauspicious for the couple getting married.

And so, the family decides it is time to get rid of Karuppu Durai, an elderly man, who has single-handedly brought up his sons and daughters after the death of his wife, through a practice that is still prevalent in large parts of rural India. In this method, the elderly person is forced to take a cold oil bath and then made to drink the water from five to six tender coconuts. The treatment results in the victim contracting pneumonia and eventually passing away.

Just when the family makes arrangements for the cold shower treatment, it so happens that Karuppu regains consciousness. What’s more, he realises what his family is up to.

As he ambles along, unsure where to go and what to do next, he happens to bump into a young kid called Kutty. The child is an orphan living in a temple. Soon, Karuppu takes a liking to the exceptionally sharp kid, who christens him KD.

It doesn’t take long for friendship to blossom between the two, who find solace and comfort in the company of each other. The street-smart kid soon helps KD make a bucket list and ensures that all his dreams come true. What that list comprises and how the two go about realising it is what the film is all about.

Director Madhumitha comes up with a wonderful, heart-touching tale of an old man and a young boy, who both have their own perspectives on issues but who are both accomodative of others’ views as well. In the process of narrating their tale, she also highlights several crucial problems that are prevalent in our society even today.
The beauty of it all is that she does not attempt to lecture you on whether the conditions prevailing are right or wrong. She lets you be the judge of that. All she does, through KD, is hold a mirror to society to show how it has become or to be more politically correct, how it has been all this while.
The two characters around which the entire story is woven are just absolutely marvellous and it is a joy to watch them at work. Mu Ramasamy, who plays Karuppu Durai,  in particular, is just outstanding.
In the film, one of K D’s wishes is that he has to be paid for something he loves to do. The young kid, Kutty, finds out that the one thing that KD loves to do the most is eat biryani. The manner in which KD eats is so endearing that others, who watch him eat, too are tempted to taste biryani. This leads to a situation where the shop owner’s business triples. Realising this, Kutty strikes a deal with the biryani shop owner. In return for getting KD to eat at his shop, he makes the shop owner part with free biryani and a sum or Rs 100 every day. This is a simple sequence but the manner in which Ramasamy as KD handles this sequence is so awesome that not just the characters on screen but also audiences watching the film feel like eating biryani.

Nagavishal, who plays Kutty, is outstanding as well. Cheeky, naughty, sharp and yet innocent, Nagavishal steals your heart.

The director seems to have taken adequate care in making sure that she does not introduce any mannerisms or traits in these characters that could distance them from the audiences.

The film has some lovely visuals, thanks to cinematographer Meyyendiran Kempuraj’s watchful eyes and excellent photographic skills. Karthikeya Murthy’s music is not just apt but also pleasing to the ears.

On the whole, KD @ Karuppu Durai is a film worth watching!