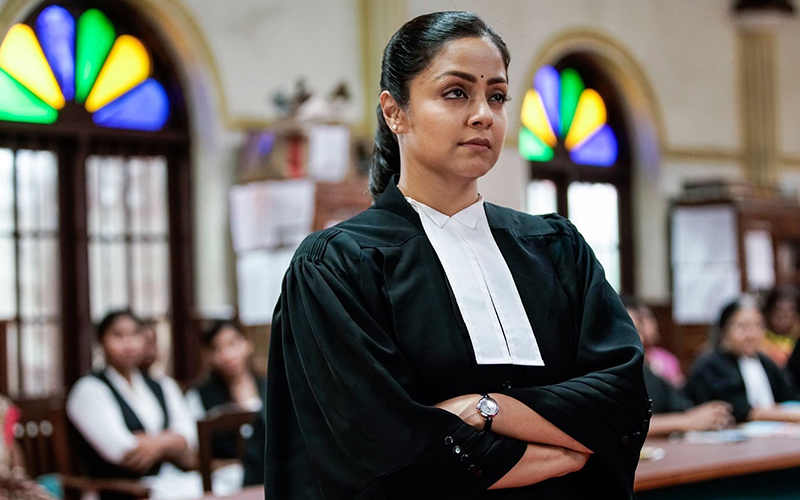 Ponmagal Vandhal is a story about a lawyer who fights for justice for a woman who has been wrongly convicted.

The story begins in Ooty where a social activist called ‘Petition’ Pethuraj (K Baghyaraj) files a plea to reopen a kidnapping and murder case that happened in 2004. Convicted in the case is a woman called Psycho Jyoti, who is alleged to have kidnapped and killed five girls and two men. The charge is that she killed the men while they were attempting to rescue a girl from her.

Psycho Jyoti is no longer alive but Venba (Jyotika), who happens to be Pethuraj’s daughter and a lawyer, decides that she will ensure that Jyoti gets the justice that is due to her.

How she goes about proving Jyoti’s innocence is what the film is all about.

The film makes an emotional appeal  to everyone in society to take it as a personal attack on either themselves or someone dear to them every time they come across an incident of violence against women and girls.

The film has some fine performances to offer. Parthiban as Rajarathinam, the lawyer for the prosecution, is outstanding. In fact, it is Parthiban’s majestic portrayal of Rajarathinam that brings in some credibility  to the film.

Thyagarajan as the big shot businessman is equally impressive in the film. Both these actors raise Ponmagal Vandhal up by a notch each.

Cinematographer Ramji’s work in the film is also highly commendable. Ramji captures the beauty of Ooty with his lens and provides a feast to our eyes.

On the whole, Ponmagal Vandhal highlights an important social issue.