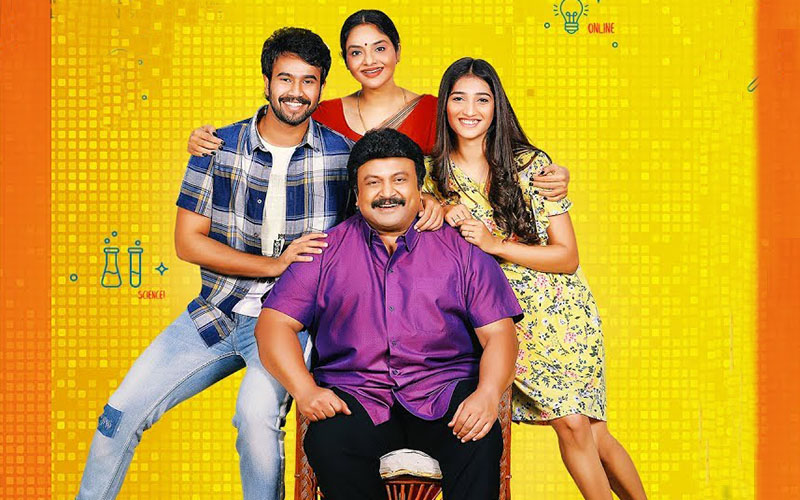 Director Hari Santhosh’s College Kumar is a light-hearted drama that leaves you not just entertained but also motivated.

Prabhu, a hardworking and nice person, works as a peon in the office of his friend, a wealthy auditor. One day, Prabhu is seen in an anxious state. The reason, we are told, is that his wife (Madhubala) has been admitted to a hospital for delivery.

It is not before long that he learns that his wife has given birth to a son. Excited, Prabhu is in a tearing hurry to leave office. In his excitement, he accidentally spills coffee on his boss and on the tax papers that he is examining.

Naturally, the boss is enraged. Insults fly and Prabhu is fired. In a fit of rage, Prabhu too retorts. He swears that he will get his son to be an even greater auditor than his friend and leaves his office for good.

Years pass and Prabhu’s son, Rahul Vijay, grows up to be a handsome young man having a collegiate education. Prabhu and his wife, despite their difficulties, lovingly nurture him and sincerely believe that someday, he will make their dreams come true. However, Rahul has no interest in studies. He constantly keeps bunking classes and flunking exams. What’s more, he lies to his parents and presents the mark sheets of those who have stood first in class as his. To add insult to injury, he falls in love with a girl in his class, who happens to be the daughter of the auditor with whom his dad has had a big fight.

One day, things get out of hand and Rahul gets thrown out of college for indiscipline. That is when Prabhu realises what his son has been doing in college. He chides him for his indiscipline. However, the brat that Rahul has grown up to be, he shows no remorse for his wrong doings. Instead, he blames Prabhu for trying to impose his dream on him. Rahul tries to sell the argument that studying is a much more difficult task than earning and providing for a family.

The conversation between father and son soon spirals into an argument and before long, Rahul taunts Prabhu about not having an education himself and how he will find it impossible to study, if he is put to the test. Prabhu says he did not have anybody to provide funds for his education and that he had to give up studies to support the family. Rahul, for the sake of gaining an upper hand in the argument, throws a challenge to his father and says he will work and provide for the family and also take care of educational expenses, if his father is willing to go to college and study.

It is here that the twist in the plot occurs. Prabhu, unexpectedly, takes up the challenge and offers to study.

Caught unawares, the son has no other option but to now go to work while the dad goes to college. Does Prabhu get his degree and then eventually end up becoming an auditor? What happens to Rahul who has now discontinued his education? College Kumar gives you the answer to all these questions.

Without doubt, the film’s plot bears a striking resemblance to the plot of the Tamil film Amma Kannakku, which in turn was the remake of the Malayalam hit, Udharanam Sujatha, featuring Manju Warrier in the lead.

Although the plot seems similar, the stories are not exactly identical. There is a marked difference in the manner in which this story evolves. Moreover, this film has more than one message to offer. Udharanam Sujatha made it evident that age is not a limiting factor when it comes to having an education. College Kumar too drives home this point but then, does not stop with just that message. It also underlines the fact that when an individual is willing to work hard and be sincere, he can rise to the top without education.

Also, while Udharanam Sujatha was about the relationship between a hardworking single mother and her indisciplined daughter studying in school, College Kumar is about a dad and his son, who is studying in college.

Years might have passed but actor Prabhu hasn’t lost any of his charm at all. He continues to be that lovable actor on screen who lights it up with his sweet smile and brilliant acting.

Sadly though, the same can’t be said of Madhu Bala. The actress, who made an impact in Mani Ratnam’s Roja, is only a shade of her former self. She seems feeble and out of place in the film and is often found over acting.

Youngsters Rahul Vijay and Priya Vatlamani deliver commendable performances. On the technical side, the film’s music and cinematography are pretty ordinary.

Director Hari Santhosh manages to deliver a reasonably good film that is entertaining for the most part. But for some lapses here and there, College Kumar is a decent entertainer.