Skip to content
You are here
Home > Home > Review: Sulthan 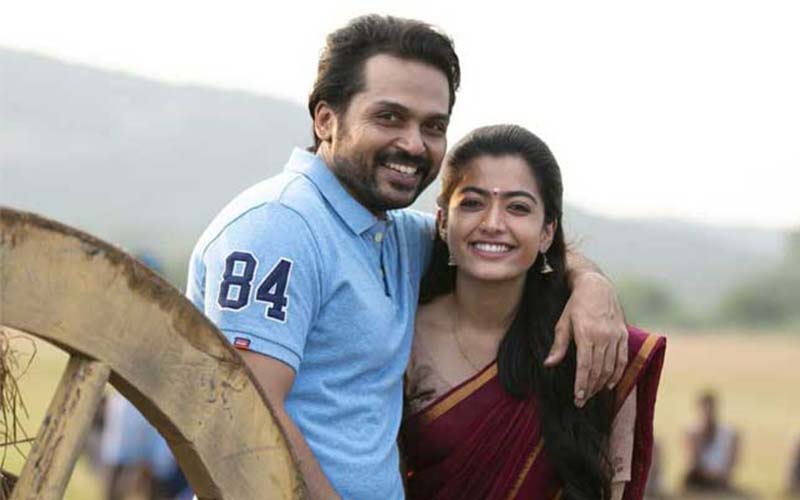 Director Bakkiyaraj Kannan spins a story that seems to be slightly inspired by Akira Kurosawa’s Seven Samurai. While parts of it seem to be inspired by the masterpiece, the other portions are cleverly built into the plot in a reasonably seamless manner. However, the film fails to impress.

Synopsis:
The story is simple. Sethupathi (Napoleon) is a don who resides in a palatial home with almost a 100 of his henchmen. The only woman in the house is Sethupathi’s wife, Annalakshmi (Abhirami), who passes away during childbirth. The child, Trivikram alias Sulthan (Karthi), is brought up by Sethupathi’s loyal henchmen, led by Mansoor (Lal).

Although Sulthan grows up in a house of goons, he abhors bloodshed and looks to become a robotics engineer. He grows up to be one. While the world looks at Sethupathi’s henchmen as goons, Sulthan considers them his brothers. His strong bond with all his dad’s henchmen, who have brought him up as their own, makes him look after their interests.

Under these circumstances, Sethupathi is approached by a group of villagers, who seek protection from a goon threatening to grab their lands. Sethupathi, who is looking to atone for the crimes he has committed, gives them his word that his men will come down to protect their village and eliminate the goon. Unfortunately for him, some developments take place that drive a wedge between son and father. Unable to digest the fact that his son is cross with him, Sethupathi passes away in his sleep, a broken man.

The responsibility of looking after the interests of his dad’s henchmen falls upon the shoulders of young Sulthan, who gets to know that the cops have plans to take out all of the senior guys in his gang as part of their plans to clean the city of rowdyism. Fearing for their lives, he goes to meet the police Commissioner and pleads with him to give him an opportunity to reform his brothers. The commissioner grants him six months time and says during this period, there should be no complaints against any of them in the city.

Sulthan makes his brothers promise to him that they will give up violence. It is at this point in time that the villagers call Mansoor to remind him of Sethupathi’s promise to them.

Mansoor, who intends to keep Sethupathi’s last promise, silently looks to dispatch a group of his men to the village. However, Sulthan catches them sneaking away. They lie to him, with one of them (Yogi Babu) saying, he is looking to visit his native place to meet his prospective bride and that the others are accompanying him. Sulthan sees an opportunity to move all 100 of his brothers out of harm’s way and says all of them will the city and accompany the bridegroom.

Once they reach the village, it does not take long for Sulthan to understand the crisis the farmers are facing. He looks to help them and soon understands the significance of farming. How he then convinces the goons with him to give up their violent ways to take up farming instead is what the film is all about.

Karthi does a reasonably good job of playing Sulthan, handling both action sequences and emotional sequences with considerable ease and comfort. Rashmika Mandanna looks adorable in her traditional outfits, exuding a charm that leaves audiences mesmerised and completely smitten. Sadly though, Karthi looks a lot older than Rashmika and one can’t help but think, why the director wouldn’t pick a younger hero for this film.

Karthi, who has been quite vociferous about giving farming and farmers their due, again underlines the significance of agriculture in this film. He stresses on the fact that while there have been significant advancements made in the fields of science and technology, agriculture continues to languish behind and implores youngsters to take up agriculture.

Yogi Babu provides the much needed comic relief in the film. His spontaneous retorts and smart one-liners succeed in bringing a smile to the faces of audiences.

No other actor, apart from the lead pair, has a meaty role. They appear for a while and then fade away as just another passing character.

The film has some lovely numbers, set to tune by Vivek-Mervin. The songs are so mellifluous that their retention value is high. No wonder then that the songs of the film are a hit.

Sathyan Sooryan’s cinematography is perfect. Be it lighting, tone or angles, the cinematographer does a neat job and gives director Bakkiyaraj Kannan just the visuals that he needs to narrate his story in a convincing manner.

One factor that does not work is music director Yuvan Shankar Raja’s background score, which is loud, annoying and as a result, distracting. In fact, there are places where one tends to get a headache because of the loud, noisy background score.

Bakkiyaraj Kannan has looked to weave a story that looks to capitalise on public sentiment. The director, cleverly, has spun a story that touches upon social issues such as grabbing of farmlands, which he knows will strike a chord with audiences. Unfortunately, the manner in which the story is narrated is boring, noisy, artificial and annoying.

On the whole, Sulthan does not impress and leaves one exhausted.