Skip to content
You are here
Home > Home > Review: LKG 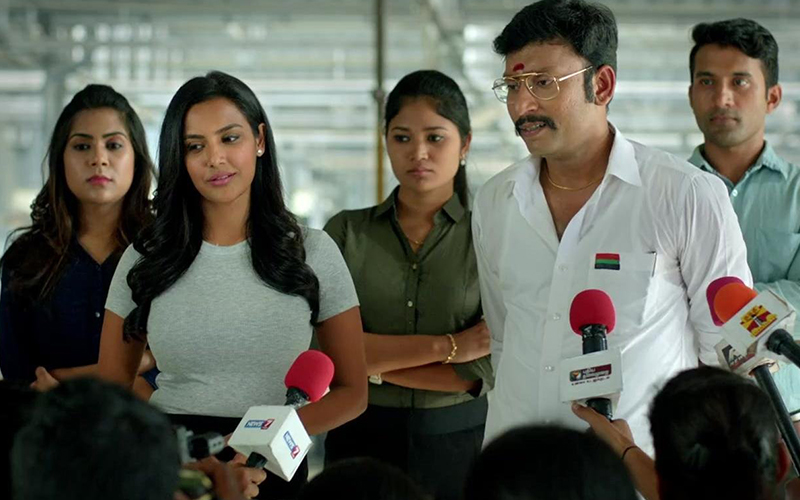 After a really long time comes a political drama in Tamil cinema that dares to mock politicians the way they need to be.

LKG showcases boldly, without any compromise, the crooked mindset and the exploitative nature of the power-hungry, less-than-qualified, ambitious and greedy politician of today.

There can be nothing more enterprising than the truth and RJ Balaji, who plays the lead character of Lalgudi Karuppaiah Gandhi in LKG, seems to have understood this well. He has cashed in on the sad state of political affairs in the state, cleverly spinning his film’s story and screenplay around the dismal and laughter-evoking developments that one has been witnessing in this state in recent times.

The movie is carefully crafted and masterfully told and the laughs continue right from the word go. Be it the Governor ogling at a professor in a college from the start to a minister trying to cover a dam with thermocol to the death of a CM and the race for power that it triggers to the use and misuse of media in general and social media in particular, the film takes a potshot at almost everything. It rips apart to shreds the image of the so-called leaders of political parties and reproduces on screen the dismal state of politics and administration.

R J Balaji craftily combines all the developments in both the political arena and society in recent times to make them a part of his well-told story. The highlight however is the climax which reinforces what the film seeks to say right from the start – Politicians talk their way to power and use this skill well to stay there. They do nothing but talk and it is through their speeches that they can and will continue to con the people.

Simply put, LKG is the story of a councillor called Lalgudi Karuppiah Gandhi, who has big ambitions and a never-say-die attitude.

LKG’s desire to become big and powerful is strong. The only thing that is more important to him than rising to power in politics is not being like his father,Azhagu Meiyappan (Nanjil Sampath), a failed politician who has remained a nameless, faceless last rung follower in a regional party all his life.

LKG, unlike his father, is a savvy, well informed, street smart politician, who constantly keeps thinking of how he can rise to a position better than the one he already holds. He sees an opportunity when the Chief Minister of the day, Aavudaiyappan (Ananth Vaidyanathan) falls sick and eventually dies.

A desire to become an MLA awakens and he looks to be the face of his party from the constituency. He hires the help of a Analytica, a data analytics firm — which for the sake of the audiences is shown just as a corporate that specialises in elections — to help him achieve his goal. In the process, he meets Sarala Munnusamy (Priya Anand) an analyst who does a SWOT analysis of both him and his opponent, Ramraj Pandian (J K Rithesh). With her help and his skills, LKG rises to the top. How he goes about doing it is what the film is all about.

The story not only talks about LKG’s motives. Through his character, it shows the state of affairs in the state. The film also shows how society reacts and what politicians do best.

The film is riveting and refreshing right from the start. Sparkling screenplay and an interesting plot that take a shot at every development, both political and otherwise, make the film a joy to watch.

The film has commendable performances coming in from all its important characters. Be it Mayilsamy, who plays LKG’s uncle Moorthy, or real-life politician Nanjil Sampath, who makes his debut as an actor, or J K Rithesh who plays Ramraj Pandian or Ramkumar Ganesan, who plays acting Chief Minister Bojappan, every single actor has delivered a good and neat performance.

In particular, Priya Anand does a fantastic job. Sleek and graceful, she is professional to the core. Priya essays a character of both elegance and power. The best part is that she does it so effortlessly. Her presence adds immense value to the film while her performance in this film makes one wonder why this actress has not been used in more powerful characters on the Tamil screen so far.

RJ Balaji is at his scintillating best as LKG. He holds the attention of the audience right from the word go till the time the end credits roll. Both the dialogues and the dialogue delivery go a long way in helping him ensure this.

One other major contributor to this film’s success is music director Leon James. What a musician! His background score is more than being just apt! It is difficult to score music for a film that has funny sequences, inspiring moments, backstabbing incidents and moments of spoof. Leon just aces it. His songs for this film — mind you there are no running around the tree songs nor are there any item numbers– are just fantastic.

Finally, what can one say about director K R Prabhu except that he seems to have done what only late director Manivannan could do so far– make masterful stinging political dramas that are a true reflection of present day political affairs and politicians.

That one statement is enough to speak of Prabhu’s work in this film. To even be able to do what director Manivannan did is something truly outstanding and extraordinary for Manivannan was a legend known not only for his impeccable character but his courage and his great understanding of political affairs. Your work in LKG has earned you this comparison Mr Prabhu! May your tribe grow!

And team LKG, take a bow!