Comali is a simple entertainer that is funny in parts. Pradeep Ranganathan, a youngster who is in his early twenties, makes his debut as a director with this film. The film begins in the late nineties when Ravi(Jayam Ravi) is a school student. His closest friend Mani (YogiBabu) is a loyalist who backs Ravi in whatever he does.

When the two friends are in their final year of school, Ravi falls head over heels in love with Nikitha (Samyuktha Hegde), a classmate. Ravi, who has learnt the art of making idols and sculptures from his dad, looks to gift an ancient idol handed to him by his dad to Nikitha. 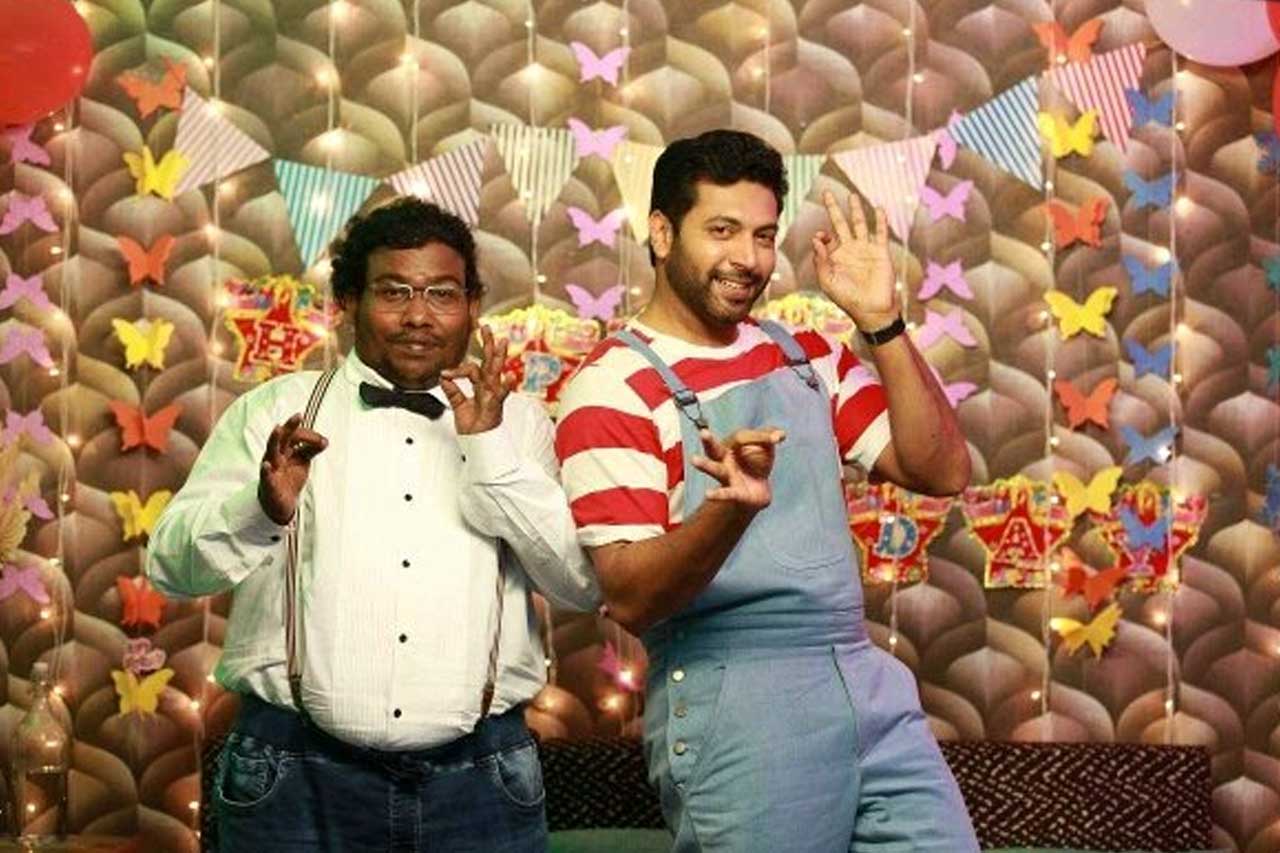 The idea is to present her the gift and then tell her about his love for her. However, just as he is about to tell his sweet heart his love for her, two rowdy sheeters led by Dharma (K S Ravikumar) look to kill a don called Gaja(Ponnambalam).

The succeed in their attempt at killing him and look to make their escape when they find themselves surrounded by the public. A desperate Dharma takes Nikitha hostage and snatches Ravi’s ancient idol to use it like a stabbing weapon. Ravi, who is desperate to save his sweet heart, does not see a vehicle coming from the opposite direction and ends up meeting with an accident. He goes into a coma.

When Ravi next wakes up, he realises that 16 years of his life have passed and he has slept through them. His dad has passed away and his friend Mani has married his sister and has been taking care of him. The world that he saw in the nineties and the world that he currently finds himself in are completely different…

The film does not have much to offer for the most part. But then, its climax which stresses on empathy and humanity, saves the day for it. The director has cleverly spun a small story around the recent floods that shook Chennai to score a brownie point.

After watching Comali, one feels that Jayam Ravi, whose Thani Oruvan and Adangamaru were rich in content, has lowered his standards. The film is full of insensitive sequences and dialogues. For instance, men are shown visiting a tea shop just to ogle at the navel of a woman, who works there. Then, there is a sequence in which Yogi Babu is seen hurling his son away and then telling his wife to keep hurling him as he has some other work to attend to.

Kajal Aggarwal’s role isn’t very convincing primarily because it hasn’t been fleshed out well. The only three people who really score are Yogi Babu, some of whose retorts are really funny, Samyuktha Hegde, who impresses as Ravi’s ex-girlfriend, and Shah Ra,who plays a doctor and Samyuktha Hegde’s doctor husband in the film.

One of the film’s songs is rich in meaning and very enjoyable. The rest are all unbearable.

Director Pradeep Ranganathan is very young and the manner in which certain sequences in the film have been presented give this fact away. As he matures, the content of his films too will be more meaningful. Nevertheless,the youngster shows immense promise and his film’s climax is an indication that he has got his priorities right.

To sum it all up, Comali offers fun in parts and ends with a flourish.