Skip to content
You are here
Home > Home > Review: Dolittle 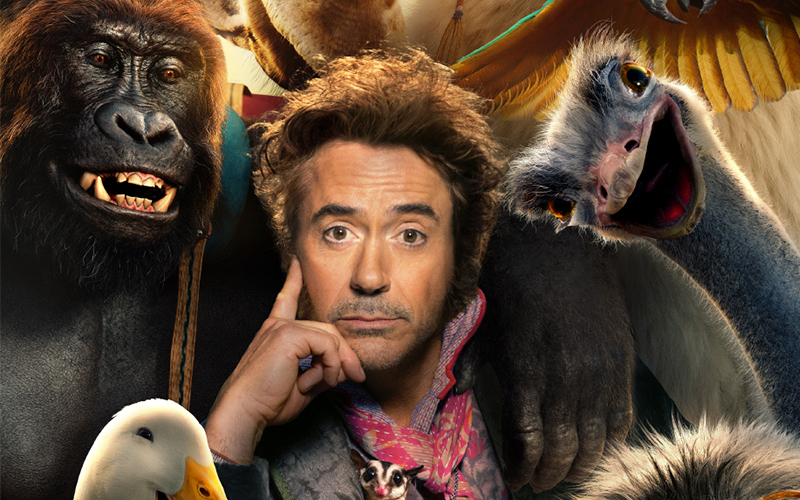 Dr Dolittle is back and how! This time, Doctor Dolittle (Robert Downey Jr) , that kind man who can talk to animals, has lost all faith in humanity after the death of his wife and has retreated to the confines of his manor, which is now a sanctuary for animals of all kinds.

He has stayed with animals and away from humans for so long that even meeting humans initially induces a sense of fear in him. It is under these circumstances that one day, a messenger from the Royal Palace arrives in search of the doctor. The young girl tells the doctor that his services are immediately required to save Queen Victoria (Jessie Buckley), who has fallen seriously ill.

Dolittle has no interest in saving the Queen or for that matter any human being. But then, his parrot Polly ( voice lent by Emma Thompson) makes him realise the fact that if the Queen isn’t saved then there is every chance that the Manor lands that she granted him and on which they reside could go out of their hands. This in turn would mean that all the animals on the manor lands would lose their home and they would then have to be relocated to sanctuaries and zoos.

This spurs Dolittle in to action and he pays a visit to the Royal palace with his animal friends — a Gorilla (Rami Malek lends his voice), a Duck (voice lent by Octavia Spencer), an Ostrich (voice lent by Kumail Nanjiani) and a Polar Bear (voice lent by John Cena). A kind hearted boy, Tommy Stubbins (Harry Collett), insists on joining him as his assistant.

On reaching the palace, Dolittle soon realises that there is a sinister plan to kill the Queen and that the only way to save the Queen is to administer the fruit of Eden. But to get it, the good doctor and his loyal animal friends must embark on a dangerous mission. Not one to say no, Dolittle, his little assistant and his animals set out on this adventure. Does Dolittle manage to save the Queen? Are the guilty brought to book? Dolittle gives you the answers.

The film is a family entertainer meaning this film is not just for the kids. It is also for the adults in the family. A thorough entertainer, Dolittle has funny dialogues all through that keep you in splits. Kudos to the team that has dubbed the film in Tamil for the dubbed Tamil version is as good, if not better, than the original English version. The interactions between the ostrich and the polar bear, in particular, are outrageously funny!

Dolittle is a film that not only makes you laugh. It subconsciously sends across the message that kindness matters. It talks about loyalty, friendship, courage and camaraderie — all essential traits for the future generations.

In this newest version, Robert Downey Jr. appears as Dolittle. He nails this one with his performance. As the reluctant, doubting doctor he scores. Antonio Banderas as Downey’s father-in-law is equally impressive. The Tamil dialogues add flair to this interesting fantasy film which is sure to leave you walking out with a smile of satisfaction on your face. My verdict: Strongly recommended!