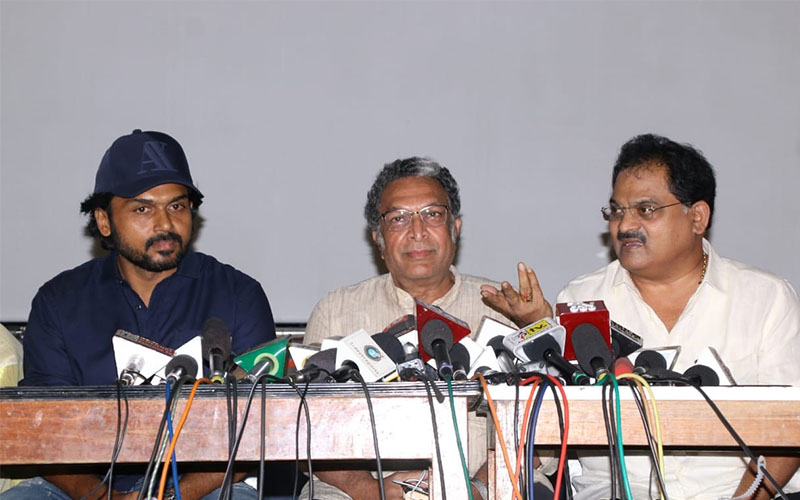 At a hurriedly convened press conference at the Prasad Lab in Vadapalani, the former office bearers, led by actors Nasser and Karthi, said, “We will be filing a plea in court asking for a stay on the order of the government appointing a special officer for the Nadigar Sangam.”

It may be recalled that the government had appointed Assistant Inspector General of Registration P V Geetha as special officer for the Nadigar Sangam.

Talking on the occasion, actor Nasser said, “We will not blame the government. Some individuals have compelled government authorities to make this decision, thereby putting the Nadigar Sangam in this difficult situation. I have just returned from Pune. Otherwise, I would have gone and handed all the responsibilities to her straight away. We have no problems complying with the law whatsoever. That is because we have committed no mistakes and we will prove this before law.”

One of the officer bearers Poochi Murugan, speaking on the occasion, said, “The Nadigar Sangam has a whopping 3,222 members. However, the government has taken this move on the basis of a complaint given by just four people. The four people who have given a complaint are M R Santhanam, the brother of actor Radha Ravi.The next is a person who acts with him in his plays called Chitralekha. One other person, who is believed to have complained is Ooty Mani. Just because of the complaint lodged by these four, the organisation that has a membership of over 3200 people is being stalled. Only, you, the media must question this.”

Pointing out that there is a case registered against Radha Ravi and Sarath Kumar for having illegally sold off 11,000 square feet in the Kancheepuram SP office, Poochi Murugan wondered how a complaint by his Radha Ravi’s brother against the outgoing office bearers could be entertained.

Actor Karthi, the former treasurer of the Nadigar Sangam, said, “These four complainants have alleged that they haven’t been getting their pension and that the Nadigar Sangam is not functioning. Till August, pension has been provided to everybody. We have dispensed the funds required to perform the last rites of a person who passed away yesterday. All the funds from shooting have been dispensed until the day after Deepavali. So, the Nadigar Sangam is functioning. The reason why the building work has stopped is because we haven’t been able to raise funds. That can happen only when the new office bearers assume charge.

Pointing out that they (the outgoing set of office bearers led by Nasser and Vishal) were the ones who had reclaimed the land of the Nadigar Sangam that was being given away and that it was they who had built a four-storey structure on it, Karthi rued that the government, going by the complaints of just four people claiming to have not received their pension, had appointed a special officer.