Skip to content
You are here
Home > Home > Review: Nishabdam/Silence 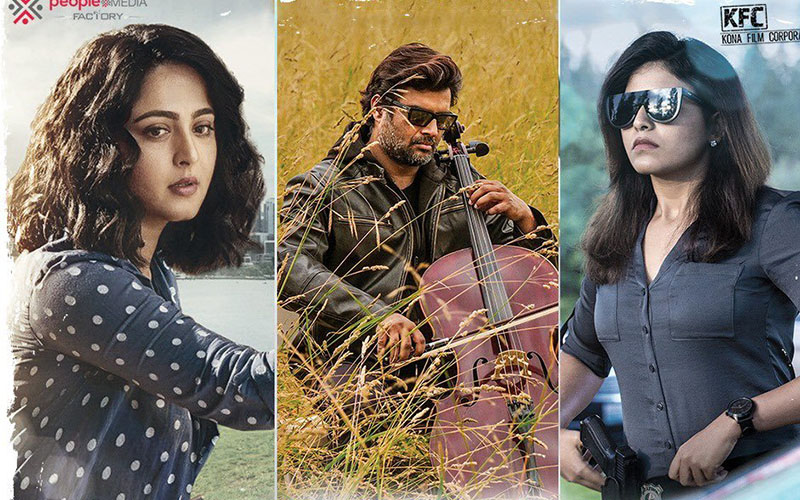 Director Hemant Madhurkar’s Nishabdam (in Telugu)/ Silence (in Tamil) is a slow moving murder mystery that leaves a lot to be desired.

To be a little blunt, it is a sad attempt at filmmaking with very few factors working in its favour.

In fact, the plot moves at a such a slow pace that half-way through, one is even tempted to switch over to watching something else that can be a little less taxing and a lot more rewarding.

The film starts off with a world famous musician Anthony (Madhavan) and his sweetheart Sakshi(Anushka Shetty), a speech and hearing impaired artist,  making their way to a villa in Seattle to pick up a painting that she wants to copy.

The only hitch is that the place has a reputation for being haunted. Upon entering it, disaster befalls the couple. Anthony is brutally attacked and ends up dead while  Sakshi manages to escape with bloodstained hands and feet.

Anthony’s brutal death brings along with it several questions. Who killed Anthony and why? Was it a supernatural force or was it human?

The cops arrive on to the scene to investigate.

Chief officer Richard (Micheal Madsen) and his lead crime investigator Maha (Anjali) take charge and begin investigating the death. But then, things aren’t what they seem to be and soon, Maha realises that things are not adding up and that no one can be trusted…

To be honest, Nishabdam gets off to a great start. The director almost succeeds in scaring you when Anthony enters the villa in search of the painting and starts sensing that something is amiss. But then, immediately after his death, the story loses steam and you lose interest.

This is exactly the point that the film goes off track. And the reason that happens is because of bad casting. The characters that are supposed to take the plot forward immediately after Madhavan’s death are played by two actors who seem to be completelyat sea about their roles in the film.

Yes, I am talking about Anjali and Micheal Madsen, who play the cops in the film.

While Anjali simply doesn’t come across like a cop right till the end, Micheal Madsen looks completely disinterested!

Anjali has no idea how to play a cop and her dialogue delivery doesn’t help her cause either. Be it her choice of dresses or footwear or her expressions, she is completely at sea and ends up with a performance that seriously dents the credibility of the entire film.

In fact, some of the scenes in which she is seen collecting evidence in the film is so funny that you actually burst out laughing. Sample this. Maha and her colleague are examining a room to collect articles that might give them prints of a missing person. While her colleague wears a pair of gloves and carefully seals items he thinks might have prints, Maha simply picks up stuff with her bare hands and hands it over to him for examination!

One could go on and on about such goof ups but then, it simply isn’t worth the effort.

But not everything about the film is bad.

It has its share of positives. One of them is Anushka Shetty’s performance. The actress, who is back after a while, shows that she hasn’t lost her class one bit and manages to come up with a commendable performance as Sakshi.

Madhavan and Shalini Pandey too come up with decent performances.

In short, Nishabdam ends up coming across as an amateurish attempt at narrating a murder mystery.

My suggestion is watch it if you only have time to kill!