Skip to content
You are here
Home > Home > Nothing can make a father more proud, says actor Vikram on son Dhruv’s performance 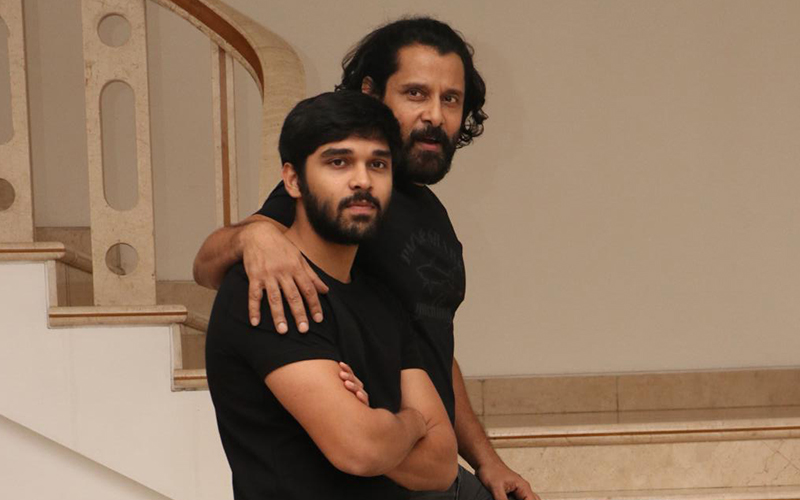 Director Gireesaaya’s Adithya Varma, which marks the debut of actor Vikram’s son, Dhruv Vikram, as a hero in Tamil cinema, has received a heartwarming and tremendous response from audiences. The film is the Tamil remake of the Telugu super hit, Arjun Reddy.

In a bid to express their gratitude to both fans and the media for their support to the film, the team of Adithya Varma organised a press conference at a prominent star hotel in the city on Sunday.

Speaking on the occasion, actor Vikram said, “One of the Tamil publications had carried these lines in their review of the film. ‘Yesterday, Dhruv was Chiyaan Vikram’s son. Today, Chiyaan Vikram is Dhruv’s father, Sabaash!!’ I felt really happy reading those lines. Nothing can make a father more proud. The entire media fraternity has appreciated Dhruv and the film and I am immensely thankful to all of you. All of you have been a big strength. I am touched and honoured.”

The actor then went on to speak about five important people.

“The first is Sandeep Vanga. His story is so wonderful. I love you Sandeep for this. Thank you for creating such a wonderful script. The second is producer Mukesh. Just looking at a dubsmash that Dhruv did when he was 13 or 14 years, Mukesh sir chose to come and ask us to allow him to cast Dhruv. Therefore, I wish to offer a very big thanks to Mukesh sir. Dhruv and I will always indebted to him,” Vikram said.

“The third is cinematographer Ravi K Chandran. Ravi’s aesthetic sense and the support he has provided have been a big strength. The fourth is actor Anbu,” Vikram said.

The actor laughingly said, “I tortured Anbu. Actually, I tortured everybody. I would keep telling him that this film would take him places. While Rajasekar wrote the dialogues for the entire film, I wanted Vinod Maari to write Anbu’s sequences as I wanted it to be humourous. That is why you find his portions funnier when compared to the other versions. Anbu has done his role well. He hesitated in the scene where he had to slap my son, but then, he eventually got it right.

“Finally, the fifth is my fans. A big thanks to all my fans as they gave the same response to my son’s film as they would to my film. My fans are very important. The biggest contribution was made by directors Gireesaaya and Shaurya. Gireesaaya was the co-director of Mahanati and Arjun Reddy. They are so hardworking. Gireesaaya is going to become one of the biggest directors. I wish to congratulate him now itself. Without Shaurya, I wouldn’t have been able to connect with anyone. The whole team has done a great job. Hats off to my Assistant Directors. I am very proud. It is a beautiful launch,” Vikram said.