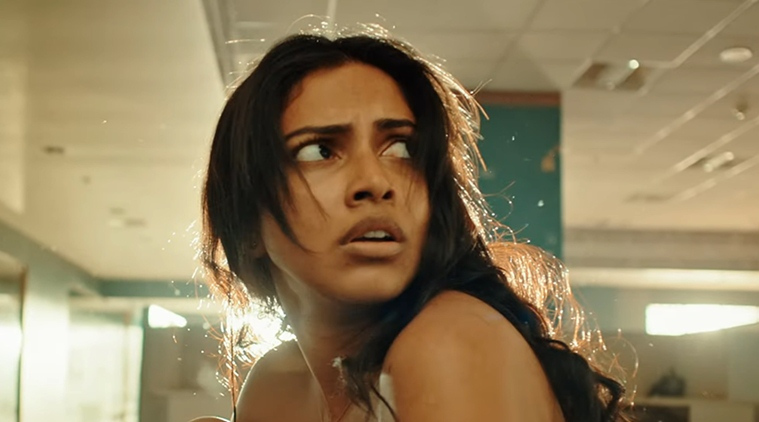 Actress Amala Paul, who was supposed to to work with Vijay Sethupathi in his upcoming film tentatively title VSP33, has said that she has been thrown out of the film by the production house producing the film.

In a statement, Amala Paul said that she was greatly disappointed with the development of having been thrown out of this film by the production house that had cited her “not being production friendly” as the reason for the decision.

A furious Amala claimed that such an accusation had never been levelled against her by anybody else on her decade long acting career.

Looking to establish that she was co-operative, the actress cited a couple of instances where she had been cooperative.

She said, ” For the movie, Bhaskar Oru Rascal, I had to let go of a part of my agreed salary and in fact I had to lend money to the producer when he couldn’t meet his financial applications at the time of the movies release. Also, I chose to never file a legal complaint asking him to settle my salary or loan. Rather, I decided to let go of it as I am aware that the producer had made a loss.”

Citing another instance, Amala said, “For Adho Andha Paravai Poley, my accommodation was in a humble village home and alternative and better accommodation in the city would have incurred a loss of time and money to the already strictly budgeted film. We shot heavy action scenes extensively for multiple days and nights in a row. Even after suffering a ligament tear, I shot for 5 more hours then agreed upon earlier, just to not let the money spent for the location and crew go waste. On the last day of shoot, I bore the expenses of one full day’s shoot so that the quality of the film is not compromised.”

Amala also spoke about her upcoming film Aadai. She said,” for Aadai, I agreed to work with the production on a lower salary come profit share basis and finish the entire film just with the advance amount.Until now, I have only pushed the production to prioritise in bringing out the movie at its best form and put my needs as the last priority. Even though it is tough on my side, financially, I am focusing on doing only one movie at a time in order to quench my quest to make quality cinema.

Amala claimed that she was in Bombay purchasing clothes and working on the styling for the VSP33, bearing the cost of travel and accommodation herself. She alleged that she was doing it herself as she claimed ” Chandaraa productions always mewls about their budget issues.”

She said that out of the blue, the producer Rathienavelu Kumar sent her a message stating that he didn’t want her in the film as her demands and terms didn’t suit Chandaraa Arts’ project. She said that she discovered that he was referring to “to the demand of an accommodation in Ooty” and adds, “Anyhow, he never bother to call me before making his conclusions and hastily decided to throw me out of an ongoing project.”

Amala says that she thinks that this isn’t the real reason. “The only thing that sounds vaguely plausible is that he took this decision after the release of the Aadai teaser. It’s just a patriarchal, egoistic, traditional mindset of Chandaraa Arts’ Production that this is happening right after the release of the Aadai teaser and my image is being sabotaged with multiple baseless rumours that are mischievously being floated around in the industry.”