Director Pa. Ranjith, who is known for his stories that revolve around the poor and the underprivileged classes in society, comes up with an engaging sports entertainer in Sarpatta Parambarai.

To his credit, he seems to have delivered a dramatic thriller that by and large meets the huge expectations that the trailer of the film had generated.

The story is about the passion and skill that people from the North Madras region have for the sport of boxing. The passion and intensity with which the sport is practised in these regions even to this day has always been a well known fact. However, how the craze for the sport originated was something not many knew. Ranjith’s film, while narrating a story of grit, determination and deceit, gives details about the origins of the sport in the region.

The story, set in North Madras during the Emergency period, is about different paramabarais from the region that are into boxing. Each parambarai or group has a legacy in boxing which it fiercely intends to preserve. Fighters stake their all to win bouts and thereby enrich their parambarai’s legacy.

Two of the top parambarais — Sarpetta and Idiyappa — are constantly at loggerheads, with each trying to outscore the other. Their enemity knows no bounds and has been on for years.

Although Sarpatta, which is headed by Rangan Vathiyar (Pasupathy), has a rich heritage in the sport, it is currently in a crisis. The club’s fighters manage to win the lighter weight bouts but then its heavy weight fighters alway lose to Idiyappam, thanks primarily to Vembuli (John Kokken), an undefeated champion.

Vembuli’s consecutive victories delight his Parambarai, who lose no opportunity to mock and ridicule Sarpatta in general and Rangan Vathiyar in particular. Vembuli himself is arrogant, hostile, dominating and insulting. 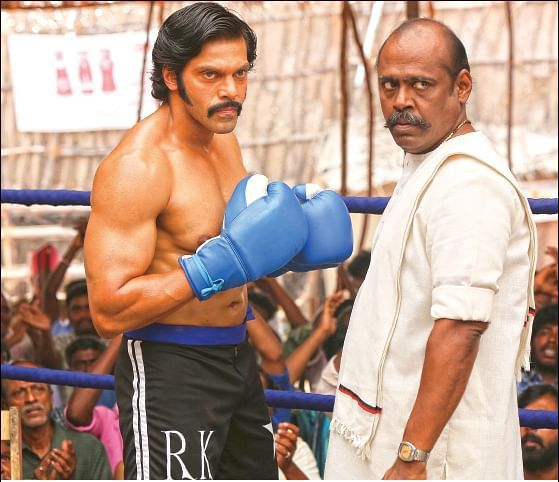 The actual story starts after one championship bout in which Vembuli defeats Sarpetta’s boxer. Idiyappa Paramabarai members begin to mock Rangan Vathiyar. The insults are too much to bear and Rangan Vathiyar, in a last ditch effort to redeem his club’s pride, challenges Vembuli to yet another bout for one last time.

Seizing the opportunity, Idiyappa Parambarai says they will agree to the challenge on one condition. The condition being, Sarpatta ceasing to exist, if Vembuli wins the bout. Much to his club’s horror, Rangan Vathiyar takes the bait and accepts the condition.

Although Rangan Vathiyar accepts the challenge, he has no boxer in his club to match Vembuli’s power and technique. His best bets are either his son, Vetri (Kalaiyarasan) or Raman(Santhosh). Rangan Vathiyar chooses Raman but ego problems, jealousy issues creep in and complicate things.

Just when all seems lost, Rangan Vathiyar sees a streak of brilliance in a loyal and ardent fan of his Sarpatta Parambarai. What happens then is what the film is all about.

The film has some mind-blowing performances to offer.

Without doubt, the first performance that really stands out in Sarpatta Paramabarai is that of Shabeer Kallarakkal, who plays the character of Dancing Rose to perfection. 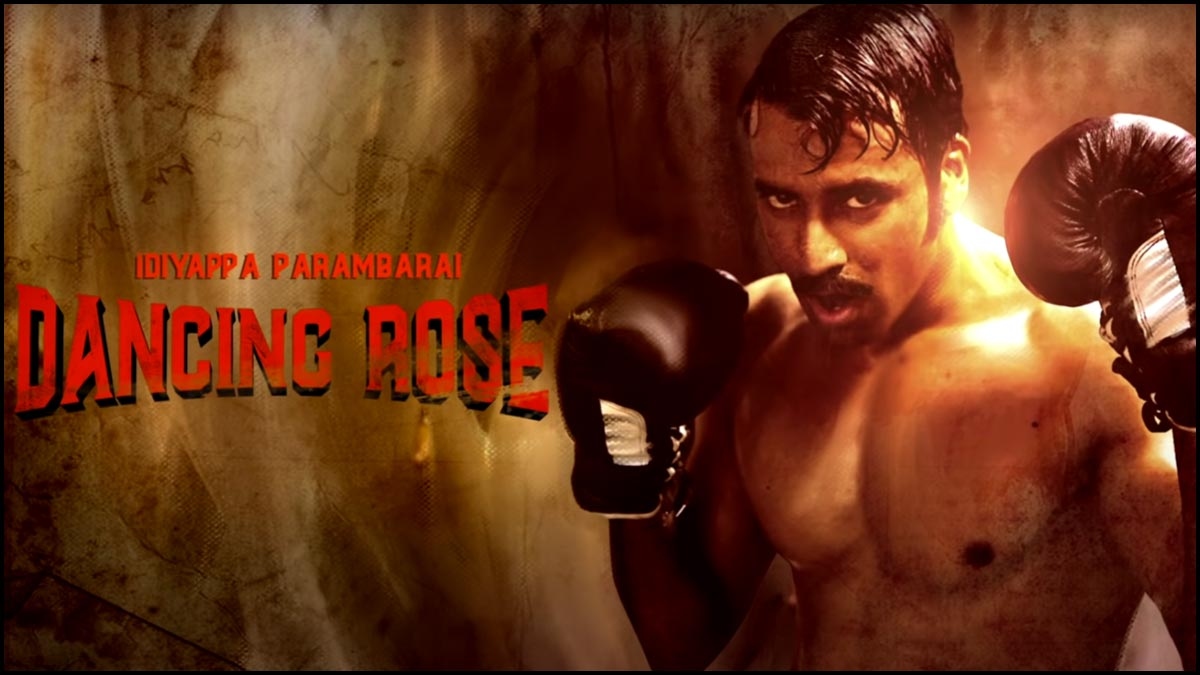 Initially, to begin with Dancing Rose comes across as just an annoying sidekick of Vembuli. But thanks to Shabeer’s exceptional performance, you begin to admire the character and respect it for being a true professional.

The bout between Kabilan (Arya) and Dancing Rose is just one of the exceptional high points of the film. Shabeer’s outrageous dancing moves aimed at mocking his opponent are so graceful that one cannot but admire it. Add to that his ability to deliver devastating punches and his commendable gymnastic skills and you have a character that outshines even that of the hero.

Shabeer’s portrayal of Dancing Rose will go down in history as one of the best ever portrayals of a boxer who had panache.

Arya himself as Kabilan does justice to the role of an underdog rising up the ranks to take on not just his opponents outside the club but also those inside.

The amount of effort that Arya has made to play a boxer is very evident. His body language and his expressions all add up to increase the intensity of the performance.

Not just Arya. John Kokken who plays Vembuli is just outstanding. Kalaiyarasan, who plays Vetri, and Santhosh, who plays Raman, also seem to have poured blood and sweat into their roles. In all, the efforts all the boxers have put into this film is just mind-boggling.

Three other characters deserve special mention. The first of these is John Vijay, who plays Daddy. John Vijay revels in the role of the Anglo-Indian, speaking English more often than Tamil.

Pasupathy as Rangan Vathiyaar comes up with yet another sterling performance. Kaali Venkat, as Contractor Koni Chandran, is just perfect.

Murali G’s cinematography is just awesome. His clever shots, especially during the boxing bouts, just add so much intensity to the sequences and lift the stature of the film to another level.

Santhosh Narayanan’s music is apt and helps convey the emotion.

On the whole, Sarpatta Parambarai is a winner.