Skip to content
You are here
Home > Home > Review: Pancharaksharam 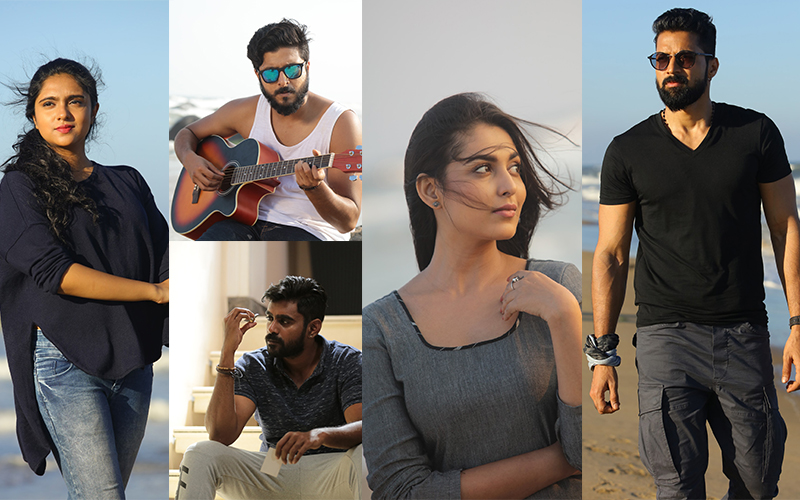 Director Balaji Vairamuthu, who is making his debut with Pancharaksharam, comes up with an exciting film that is a combination of so many factors that it could easily be categorised into any of the following genres — supernatural thriller, crime thriller, philosophical thriller or a psychological thriller.

The film’s story is deep. It revolves around five characters –three guys and two girls –all of whom meet each other for the first time at a rock concert. Jeevika (Sana Althaf), a kind hearted girl whose compassion for all things living never dies, is the organiser of the rock concert in which Aidhan (Gokul Anand), a passionate singer and music composer, is performing that night.

Aidhan’s performance that night is outstanding and many are impressed. However, there are three people who take the time to meet him in person and express their appreciation of his talent after the concert.The first among these is Dushyanth (Santhosh Prathap), a traveller who makes his living by writing travelogues. The next is Sameera (Madhu Shalini) a journalist who has now quit her job to become a writer. The third is Dharma(Ashwin Jerome), a wealthy kid who claims to be wasting away his dad’s money by drinking and doing nothing. However, his real passion lies in racing cars.

All five quickly take a liking for each other and become friends. After a hearty conversation, the four friends decide to accompany Dushyanth on one of his trips. The friends head out to the beautiful countryside and then make their way to the hills, where they spend a few days before returning home. While staying there, Sameera suggests playing a game using a book. The book she picks is an ancient book that has the power of predicting the future. Each of them take turns playing and the book makes gloomy predictions for each.

Initially, the friends don’t take the predictions seriously and treat it as a game. However, when the warnings start making sense, fear fills their heart…

Director Balaji Vairamuthu has to be congratulated for coming up with such an intense story, which he has craftily made into an exciting thriller.

It is not easy to combine psychology and philosophy and still make it appealing and entertaining to the regular audience. Balaji Vairamuthu, to his credit, manages to do that.

Pancharaksharam touches upon several deep theories and concepts in philosophy but yet, they are all presented as developments in a thriller and therefore, only those with a keen eye will be able to spot it. To the others, the film will be an entertaining crime thriller, with a touch of the supernatural.

For instance, there is a sequence in which the antagonist (Seemon) compels Jeevika, who is one of the kindest people, to kill a kitten to save her friend. He forces her to do this to prove that if there can be a streak of goodness found in him, the epitome of wickedness, there must be a streak of darkness in her. While this might appear to be the ramblings of a psychopath, in reality, this is actually the Yin-Yang theory being explained.

Not just that. Each of the five lead characters seem to have been fashioned on the five elements — the sky, air, earth, fire and water. Dushayanth, who refuses to be confined by the norms of society and who expands his options, resembles the sky. Jeevika’s character appears to resemble water. She has nothing but kindness for those around her and is empathetic to the needs of others, no matter how rude they are to her. Aidhan resembles fire. He has a fierce temper and is extremely passionate about his work. Sameera represents air. As a journalist who has reported some explosive stories despite her editor and management’s advice, Sameera shows the qualities of air. Dharma is grounded and looks to keep others grounded as well. Yet, when there is a need for him to show his mettle, he is firm and resolute.

These are difficult to fathom but if you watch the film with keenness, this is amply evident. Creating characters like these require great skill and full marks to director Balaji Vairamuthu for having successfully coming up with such characters.

All six actors playing the lead roles do a fantastic job. Yes, the sixth one happens to be the villain, Seemon, whose arrival in the film lifts it to another level altogether. He looks menacing

Sana Althaf, who plays Jeevika, looks adorable and innocent. The youngest of all the actors in this unit, she is the first one to catch your eye. Sana, who was seen in Chennai 600028 as Jai’s pair, comes up with a sterling performance in this film as well.

Santhosh Prathap, with his well built physique, has a towering personality that makes him stand out. He plays to perfection the role of Dushyanth and instantly comes across as the person to watch out for in this entire lot.

Madhu Shalini, who has acted in several films including Bala’s Avan Ivan, makes a strong comeback with this film. She seems to have evolved to a higher level as an actress and comes up with a sparkling performance as the journalist, Sameera.

Gokul Anand as Aidhan and Ashwin Jerome as Dharma also play their parts to perfection.

Music director K S Sundaramurthy’s work is exceptional. His music is one of the biggest strengths of the film. This music director is one person to watch out for.

On the whole, this is a film that can be watched with the entire family.