Actor Vishal today officially announced that he would be taking over as director of his film Thupparivalan 2. Thupparivalan 2 is the sequel to the blockbuster Thupparivalan, a film that had set the cash registers ringing. The first part had been directed by Mysskin and featured Vishal and Prasanna in the lead.

Talking about his decision to turn director, the actor said that he was awaiting the people’s blessings and wishes and that he wished to do the best as a director.

Vishal’s announcement has confirmed rumours that all was not well between director Mysskin and Vishal, ever since work on the sequel to the blockbuster began in London.

It may be recalled that Mysskin had walked out of the project after the first schedule, leaving the production house in a dilemma.

When efforts were made to help the duo reconcile, Mysskin sent Vishal Film Factory, Vishal’s production firm producing Thupparivalan 2, a list of 15 demands. Mysskin’s take was that he would assume charge as director only if all 15 of his demands were met.

2. Remake rights: Mysskin claimed that only he would own the Hindi remake rights of the film and that Vishal would have no right over it.

3. Mysskin made it clear in his 15 point charter that all the intellectual property rights of the film (both parts Thupparivalan, Thupparivalan 2) including the title would belong to him.

4. Mysskin could work in other projects in tandem if shooting didn’t take place for more than 90 days from the start of the second schedule. If, for any reason, shooting doesn’t get finished within 90 days, VFF will have to wait until Mysskin becomes free to resume shoot.

5. Vishal or his associates will have no direct access to Mysskin. Mr L V Srikanth Lakshman, Mysskin’s manager, will be his representative while UK Line Producer Sarmad, appointed by Vishal’s production house, will be the one-point contact representing the producer.

6. An office rent of Rs 66000 plus a maintenance fee of Rs 5000 would have to be paid by Vishal every month. This will be in addition to other expenses like electricity bill, food, and office expenses.

(See image to read the complete list of demands) 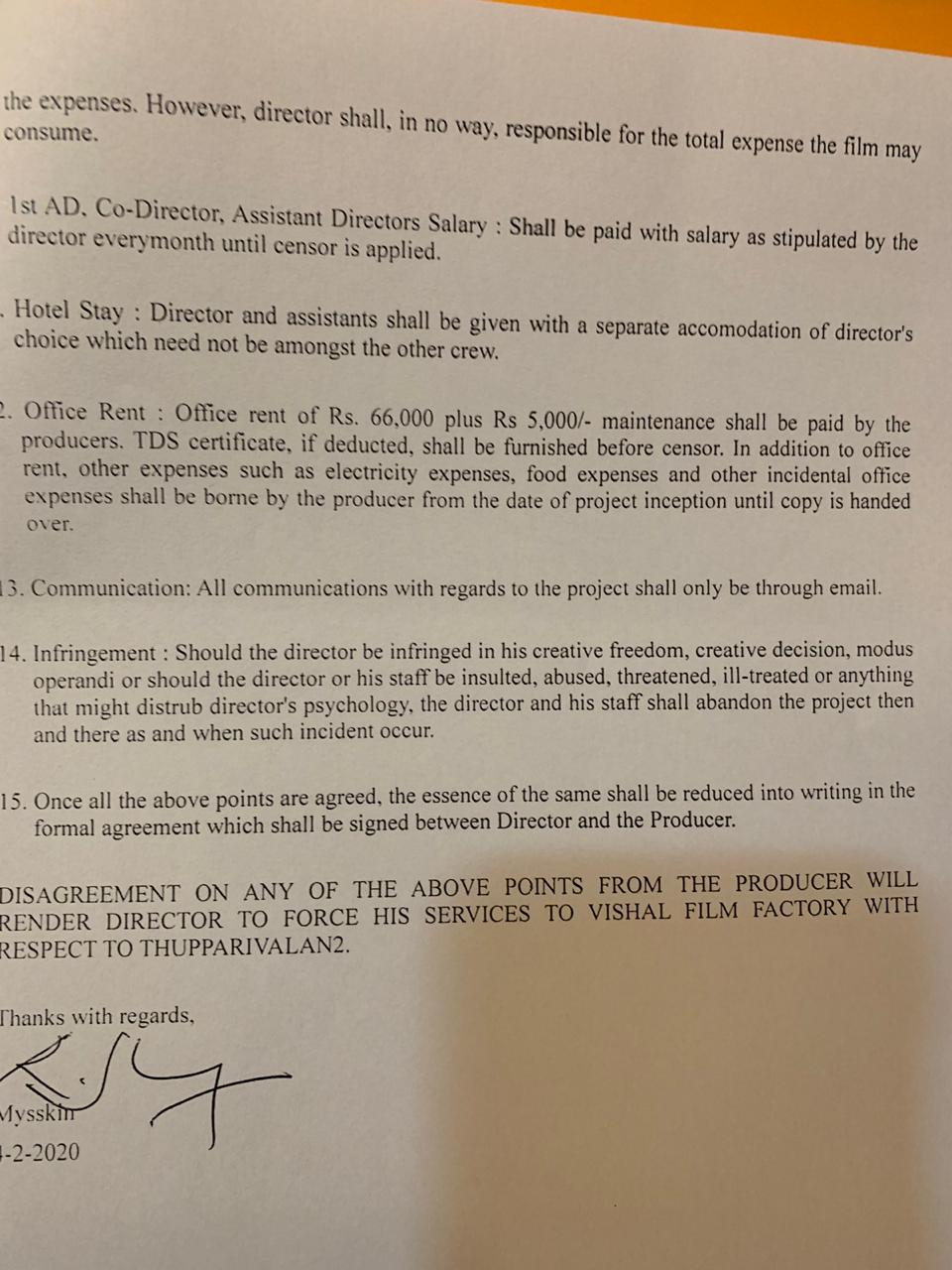 The charter of demands infuriated Vishal who then chose to take over the project himself.  Today, the actor officially announced that he was taking over the project and also made public the unreasonable demands made by the director.