Director K V Anand’s films are usually known for three things. The first is that he looks to highlight social issues through an entertaining film. The next is that he makes sure his films tell you at least one or two facts you did not know. And finally, he ensures that his films have a lot of twists and turns.

As in most of his films, K V Anand uses his film’s plot to highlight a couple of compelling social issues. The first is bio-warfare, using locusts. The next is the manner in which corporates employ third degree ways to gain control of farmlands that they can exploit. The film also gives an idea of how businessmen control and operate governments.

Without much ado, let’s get to the synopsis.

Kathiravan (Suriya), an efficient officer of Military Intelligence, is assigned to the Special Protection Group (SPG) of Prime Minister Verma (Mohanlal) after the Prime Minister personally requests his services.

We are told that the Prime Minister is impressed with the discreet manner in which Kathiravan gets rid of a dangerous chemical factory supplying weapons to a neighbouring nation.

He asks his head of SPG Unit Joseph (Samuthirakani) to have Kathiravan as his personal bodyguard and that is done in an instance.

To K V Anand’s credit, he keeps you hooked on to his film’s plot from start to finish. The story keeps moving at a brisk pace and the developments keep you engaged, leaving no room for boredom. There is very little humour in the film and whatever little humour there is comes from Arya, who plays the Prime Minister’s honest but irresponsible son. Sayyesha plays the Additional Press Secretary with the Prime Minister’s entourage.

The film has some wonderful performances coming in from Mohanlal, who plays the role of Prime Minister to perfection. Suriya looks like a commando and suits the part. Mohanlal’s combination scenes with Suriya are interesting and quite captivating. In fact, these form the soul of the film. Arya plays his part with a flourish and Sayyessha just delivers what is expected of her. 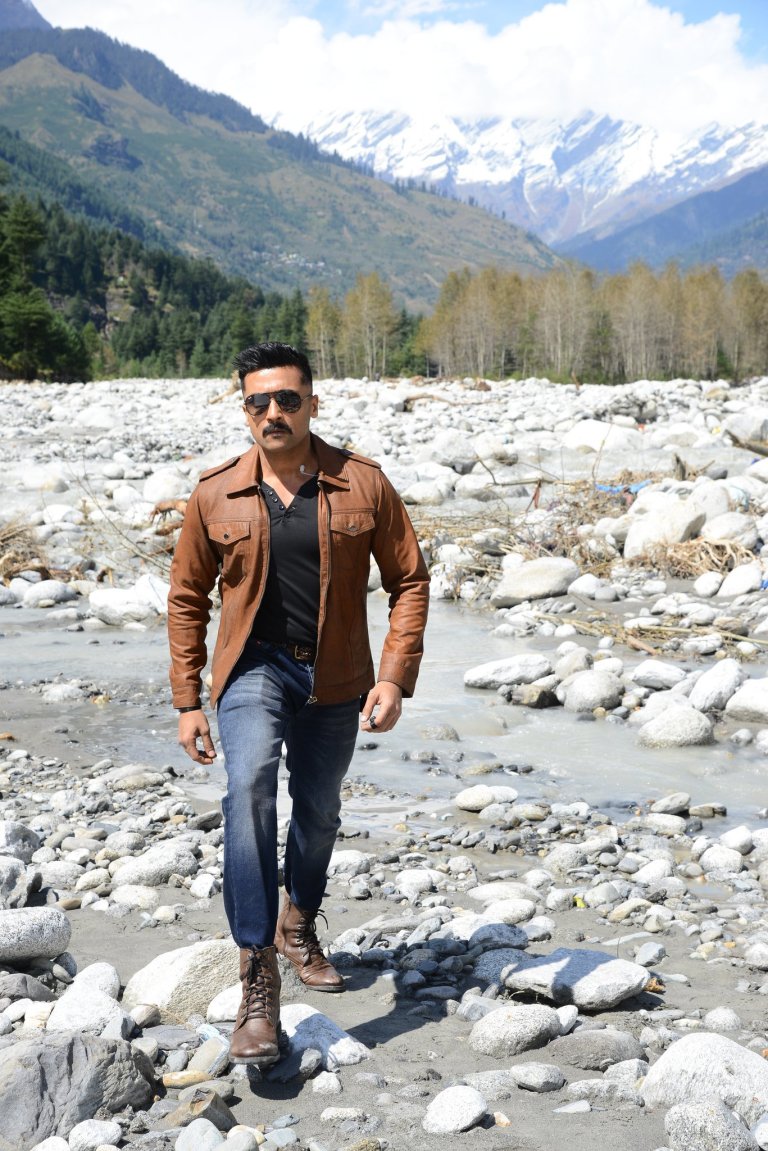 The film is a regular commercial entertainer that is interesting. On the flip side, the film has several sequences that are hugely exaggerated and therefore, the credibility of the story is eroded.

For instance, one would imagine that one would have to undergo a special kind of intensive training to be a part of the elite SPG, which protects VVIPS. To show a person from Military Intelligence being promoted to the SPG in a jiffy is just too much to swallow, even if one knows that this is only a film.

Next, SPG commandoes or for that matter those on National Duty like those in Military Intelligence wouldn’t have time to even spare for their own family members. However, the hero of the film, occasionally tends to his crops as he is also a natural farmer in his home state of Tamil Nadu. How that is possible is only something that the director can tell.

One could go on and on like this when it comes to citing examples for exaggeration. At a time when attention spans of audiences are coming down, Kaappaan is almost two and a half hours long and that does make you wince in your seat towards the fag end of the film.

Harris Jeyaraj has delivered a couple of catchy tunes for this film. Cinematography by M S Prabhu is decent.

Kaappaan is a one-time watch. It doesn’t disappoint but it also is not something that is extraordinary!