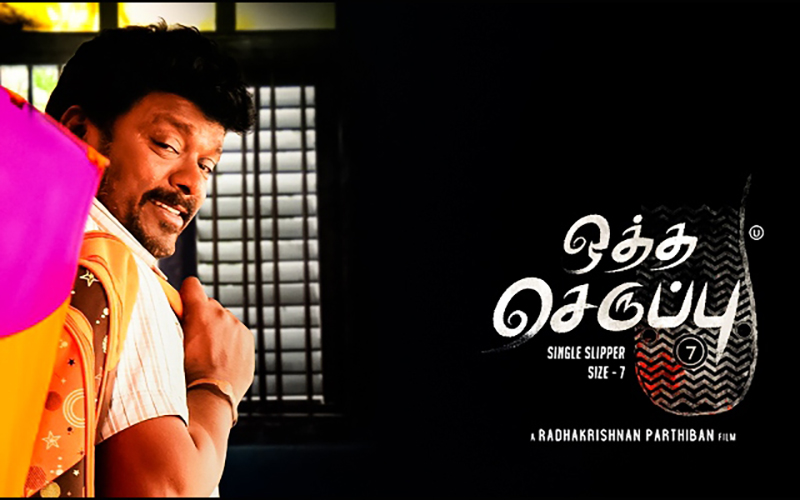 Ra Parthiban is more than just a story writer, director or actor. He is an adventurer. A man, who has immense faith in all his skillsets which include writing, acting, direction and cinematography. A man willing to take risks and push boundaries.

Oththa Seruppu is in fact just that. A prime example of his willingness to push boundaries. Single-handedly, he carries the film on his shoulders. Yes. Parthiban is the only actor in Oththa Seruppu and to his credit, he manages to keep you interested in the plot without a moment’s boredom from start to finish.

The film is almost one hour and 45 minutes long but then, you don’t feel it as the story moves at quite a brisk pace. It all starts with Masilamani (Parthiban) being made to wait in an interrogation room by the cops. The interrogation begins and all the other characters are showcased only as voice overs. What starts off as an investigation into a single murder slowly begins to assume significance as details of more murders begin to spill out. Masilamani himself comes across as a man with psychological problems because of the acute pressure his mind has been subjected to, as a result of the consistent blows that fate has delivering to him one after another.

It looks like he is doomed for life as he continues to volunteer information on the murders he has committed. At one point, he even manages to gain your pity as he talks about his young son who is counting his days to the grave and who is waiting for him outside the interrogation room.

How he eventually dodges the law is what the film is all about. Parthiban is just fantastic in all departments. But it is as an actor that he shines the most in this film.

At a time when there are actors who can’t hold the screen space and retain the attention of the audiences for even a few seconds when a close up shot is placed, Parthiban just manages to draw all the attention on to himself and makes you stay focussed on him but nothing else for a whopping one hour and 45 minutes.

There are a good number of close up shots in the film and Parthiban is just brilliant in all of them. His expressions add value to his already interesting dialogues making the whole exercise an enjoyable affair.

Parthiban makes several important points in the course of this interesting film. One he highlights the fact that motherhood has nothing to do with gender and that a man is capable of showing the same love and care if not more than a woman when it comes to tending to his young one. The film also reminds you never to judge a book by its cover.

Parthiban has always been one who has tried to stay in tune with the times and his film’s inspiration seems to have come from a recent news report in which a wife plotted her husband’s murder by conniving with her paramour. The wife had taken her husband to the beach where, under the pretext of playing hide and seek with him, had blindfolded him. She had then signalled her paramour, who with his henchmen killed the husband and then pretended to rob her and leave the place. Initially, while the cops thought it to be a case of robbery, they soon realised that this was a planned murder.

The film has some exception sound recording by Oscar winner Resul Pookutty. The sounds have to be considered as an important element as they accentuate emotions that the film seeks to convey.

It is not an easy task to kind of write, direct, act and shoot a film all by oneself. Parthiban does it and does it well.

Although it is no match for your regualar commercial fare, it is at least worth a watch for the courage and the confidence its maker has shown in his skillsets.