Director Sudha Kongara’s Soorarai Pottru is a deeply engaging film that has been remarkably well made. But what is more important is that this film doesn’t just stop with providing entertainment. It actually inspires exactly like how its director had claimed it would.

It is no secret that the film is inspired by several incidents that happened in the life of Captain Gopinath, the founder of the low-cost airline Air Deccan. So, it was a given that this story was worth its weight in gold. What remained to be seen was how well it was going to be narrated. And it is here that Sudha Kongara scores handsomely.

The director seems to have put in a lot of thought on how to narrate the sequence of events so that it keeps the audience on the edge of their seats. Take for instance the manner in which the film starts.

The pilot of a plane which is low on fuel requests permission from the ATC tower to land. Despite repeated requests, the tower denies it permission because of pressure being exerted on the DGCA from the owner of a rival airline with vested interests.

It is at this point that Suriya makes an entry, advising his pilot to crash land his plane in an airforce base. From that point on to right till the time the film ends, Sudha manages to sustain the racy pace of the film and keep you engaged.

Suriya plays Nedumaran Rajangam, a former Indian Air Force pilot with the dream to launch an airline which even a common man on the street can afford, exceptionally well.

In fact, after a long time, Suriya comes up with a performance that really shows the class that we’ve known him to exude in his earlier hits.

There are four sequences in the film in which Suriya’s performance sparkles like a newly minted penny. The first is the opening sequence in which he exudes great courage and makes a split-second decision to ask his pilot to crash land into an air force base.

The next is when he begs co-passengers for money to pay for his air ticket because his dad is on his death bed. That sequence moves you to tears and breaks your heart at the hard-heartedness of human beings.

The third is when Suriya goes in search of his wife, Kanmani (Aparna Balamurali), after a fight that the couple have. When he finds her back at home after a long search, the conversations that follow is just heart-warming and the love unmistakable.

The fourth sequence involves a press conference that he is forced to address, soon after his plane fails to take off after a fire in its wings. It is exactly at this moment that his wife begins to get labour pains and has to be rushed to the hospital.

In all four sequences, from the look on his face to his body language to his dialogue delivery, Suriya scores and scores handsomely.

To be fair to him, Suriya is just fantastic throughout the film. But these four sequences just seem extra special. 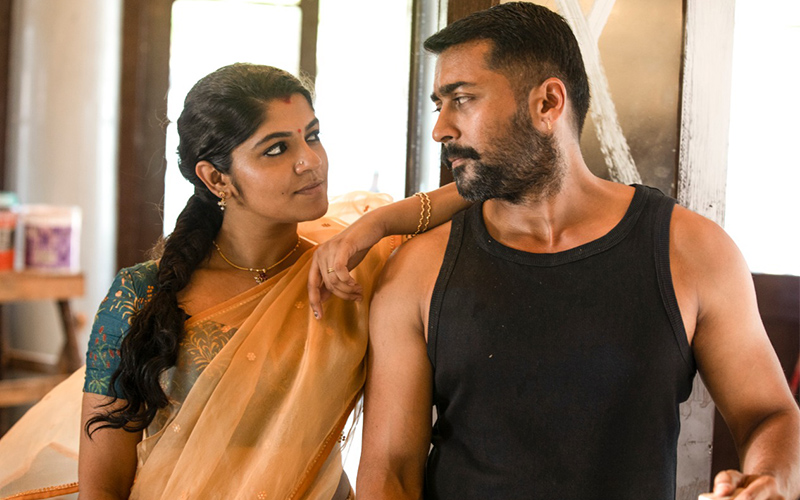 Aparna Balamurali, who plays his wife Kanmani, is equally impressive, although the romantic portions in the beginning for some reason don’t look too appealing nor convincing.

However, as Nedumaran’s wife, Aparna just fits the bill. A fiercely independent entrepreneur herself, Kanmani has her own plans of setting up a bakery chain and she ends up doing it in style.

It is not just the two main lead artistes who are impressive. What makes the film tick big time are the performances coming in from its big supportive cast. From Paresh Rawal, who plays the villain to Mohan Babu, who plays the Head of the Air Force station in which Nedumaran served at one point in time, every single actor has delivered.

But three actors have to be singled out for a special mention. The first of these is Kaali Venkat, who plays Nedumaran’s relative. The man simply blends into the character that he plays and simply adds so much credibility to the plot with his natural performance.

The next person who must be highlighted for his exceptional performance is Karunas who plays Aparna’s uncle. There’s one scene in particular in which he actually wins your heart and this is the scene in which he brings his life-long savings to Nedumaran, a princely sum of around Rs 11,000, in the hope that this money will help Nedumaran overcome his financial crisis.

The third actor who needs to be congratulated for another exceptional performance is Poo Ramu, who plays Nedumaran’s dad. The scene where he is bed ridden and eagerly awaits the return of his son is just brilliant.

On the whole, Soorarai Pottru is one inspiring wonderful tale, told with a lot of heart.

Andrew Louis is a director who is adamant on what he wants: Nasser

Andrew Louis is a director who is adamant on what he wants: Nasser